Nowadays, Hanoi has been in an attempt to build a friendly and civilized image in the eyes of both domestic and foreign visitors, for example, setting up hotlines to protect foreign tourists from fraud, theft and overcharging, decorating the city streets more beautiful by flowers … and recently, establishing a plan to develop exemplary no-smoking tourism zones, including such models as “no-smoking tourist sites”, “no-smoking restaurants and hotels” and “no-smoking offices”.

Particularly, the non-smoking tourist areas are set up in Hanoi’s Old Quarter, center shopping malls and Hoan Kiem Lake, where many tourists gather together. 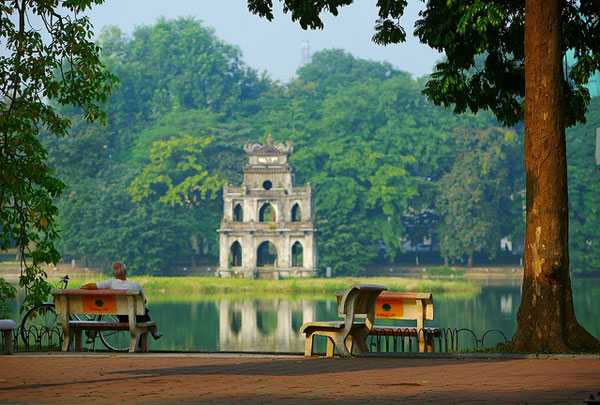 Hoan Kiem Lake, a popular gathering places for tourists, is planned to set up non-smoking tourist area in 2015

The city will not only deliver posters and leaflets warning the bad effect of cigarettes, but also make the most of the media and radio stations in order to spread messages on its harmful effects to every corner. Afterwards, inter-sector inspections will be conducted and fines will be levied on any violators.

Tourism can be regarded as an important economic sector contributing a considerable share to Hanoi’s budget. Therefore, establishing no-smoking tourist areas in Hanoi means that the city are trying to make Hanoi more beautiful and civilized in foreigners’ eyes and therefore attracts more and more visitors.