Over the last year or so, the Vietnamese Banh Mi sandwich has taken New York by storm, elevating the once humble pork and pickled vegetable sandwich to heights of gastronomic chic. In Hanoi, however, the typical Banh Mi (which translates simply as “bread” in Vietnamese and is written in English as Banh Mi in Hanoi) is a pedestrian fried egg or pâté sandwich with a few slices of cucumber or a light smearing of chili sauce. 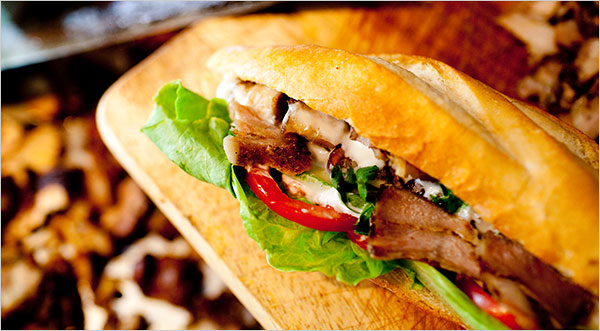 Banh My Van’s baguette is filled with an array of fresh and pickled vegetables and tender pork flavored with Vietnamese spices, generously doused with both a chili and a creamy white sauce.

An unlikely variation on the sandwich is thriving in the Vietnamese capital: the Banh Mi doner kebab, which incorporates elements of a doner kebab, the Turkish staple, tucking shaved pork, pickled vegetables and chili sauce inside a warm baguette. Turkish doner kebabs are usually halal, meaning pork-free. Is this version culinary sacrilege? Perhaps, but a tasty one.

Banh Mi doner kebab stalls blanket Hanoi, but one of the most successful is run by Cafe Goethe (58 Nguyen Thai Hoc Street), a German-themed spot whose chef, Linh Thuy Nguyen, wanted to create a version of the doner kebab that would appeal to Vietnamese palates. While Ms. Nguyen doesn’t claim to have invented the Banh Mi doner kebab, she says she was the first in Hanoi to popularize a version that melded Vietnamese and Western tastes. The stall, outside Cafe Goethe, clearly embraces a German influence, as its sandwich (15,000 VND, or about 82 cents at 18,400 dong to the dollar) loads up on crunchy pickled red cabbage and onions.

Beginning at dusk, vendors line the lower portion of Ba Trieu Street, but the best is Banh My Van (306 Ba Trieu Street;). Its baguette (15,000 VND) is filled with an array of fresh and pickled vegetables and tender pork flavored with Vietnamese spices, generously doused with both a chili and a creamy white sauce.

Hanoi’s baguettes tend to be particularly airy and crumbly — sometimes to a fault — but the sandwich shop ilu (178 Kim Ma Street) uses a denser roll, and tops its signature Banh Mi “ilukebab” (15,000 VND) with a showering of fresh cilantro and sliced red chilies. Although off the beaten tourist path, ilu is bright and welcoming and — a plus in Hanoi — air-conditioned.