Home > City Guides > Beauty of the Ancient Architecture in Hanoi

Apart from Hoi An, Hanoi is Vietnam’s only city where ancient streets can be found. These streets still keep the same appearance that they had at the end of 19th century. According to historical sources, they have been the true core of Thang Long since its foundation nearly a thousand years ago. 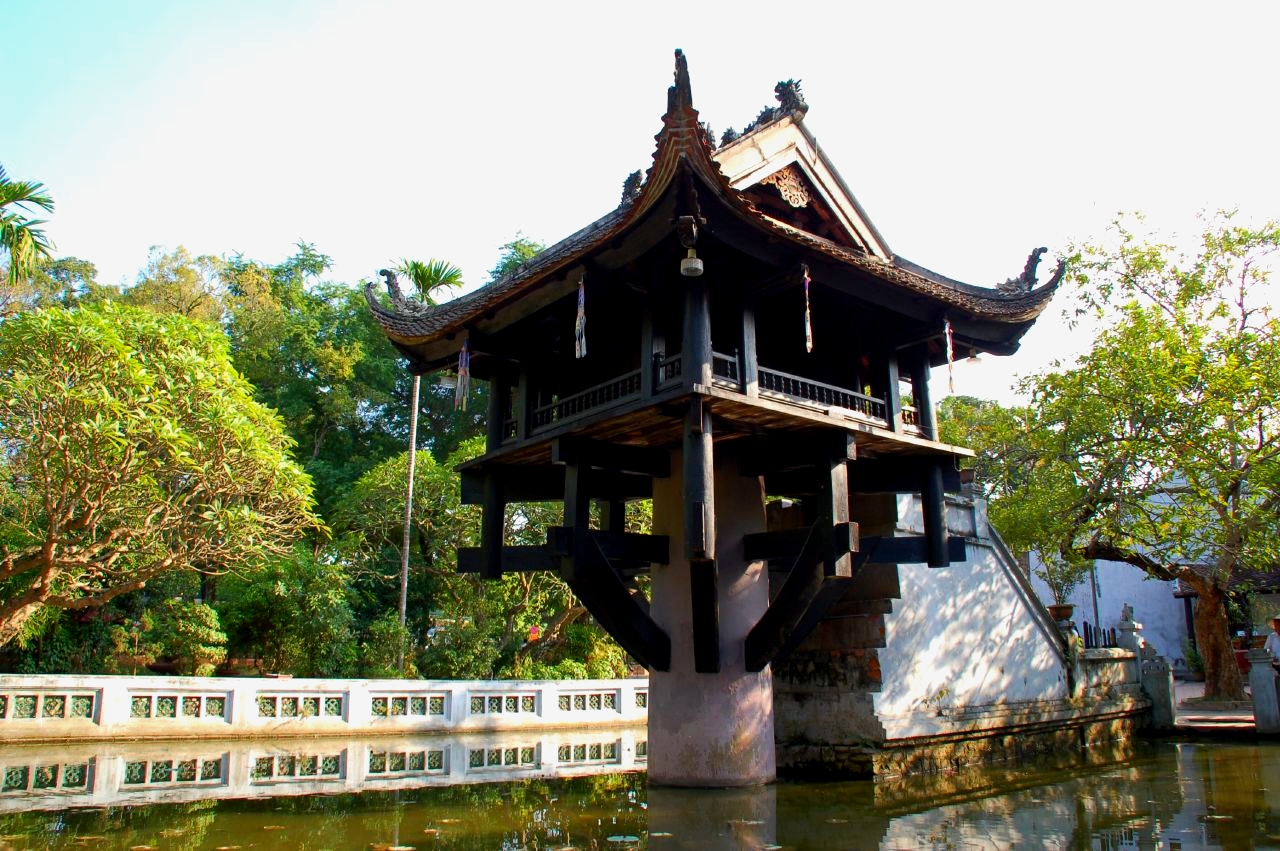 One Pillar Pagoda with the unique architecture

Prior to the French colonial period these streets all had the same appearance and were laid out in an order similar to a chessboard; most of them were named after the goods manufactured or sold there. For instance, Hang Duong means “Sugar Street”, Hang Bac – “Silver Street”, Hang Bo – “Bamboo Basket Street”.

The houses in these streets are called tunnel houses, this is because the house has the shape of tunnels, being very long and narrow, it sometimes opens at the back into another street, which is different from that of the front entrance door. All the houses are similarly arranged with their front rooms serving as places where goods are manufactured or sold, with small open courtyards to let light in, usually decorated with ornamental rocks, little water-pools with gold fish, ornamental plants and flowers. The backrooms serve as the living quarters with a dining room and bedroom. Most of these houses are covered with small tiles which have the characteristic feature of: two walls of the gable being built so that they are higher than the roof, resembling a staircase with two funny pinnacles.

They are mostly one-storied houses, few have second storey. They are generally low and have small or no windows, which arose because according to ancient rules under the past dynasties, inhabitants were forbidden to look at the king when he happened to pass their houses, and they were especially forbidden to look at him from a higher place.

Therefore, tunnel houses are simple and narrow serving both as a place of manufacturing or selling products and as a dwelling house for the family. In these streets, the shops are open all day long, and even in the evening, the quarter is always interesting to walk around. This community of people shares the same fate and they are all united by feelings of solidarity. 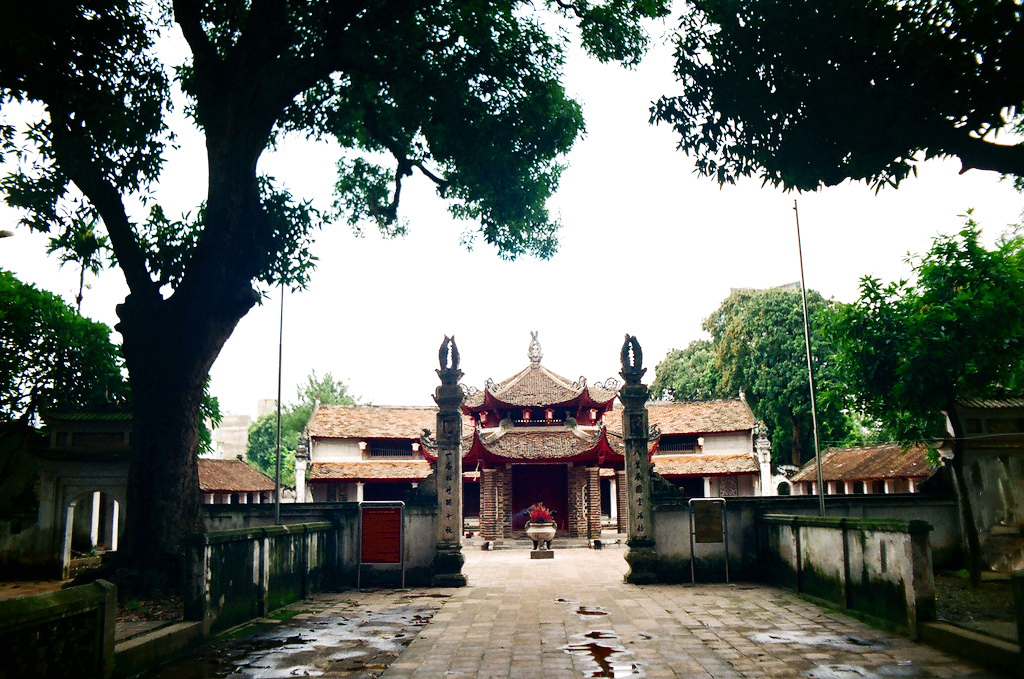 Scattered among these ancient houses are many pagodas and temples. These were the place of worship for the ancient villages and guilds. For instance, the temple situated at 38 Hang Duong street, served the inhabitants of Duc Mon village which used to occupy a part of Hang Duong street, and the Huyen Thien pagoda at 54 Hang Khoai street, belonged to Huyen Thien village, which used to occupy the territory of Hang Khoai street. These architectural sites also reflect the origin of Hanoi’s inhabitants, most of them coming from other parts of the country, for example: Hoa Loc Temple at 90 Hang Dao street, was founded by a guild of dyers natives of Dan Loan in Hai Hung province, Tu Thi Temple at 2A Yen Thai Alley, was dedicated to the worship of the patron saint of embroiderers, and built by a villager of Quat Dong in Ha Tay province who lived by the trade of embroidery.

However, on the other hand, the existence of these pagodas and temples testifies to the intense spiritual life of the inhabitants of old Hanoi, who lived in harmony with nature, society and the spiritual world. Thus, today the city’s material world coexists with a sacred legendary world; the present and the past intermingle, creating a long lasting strength. 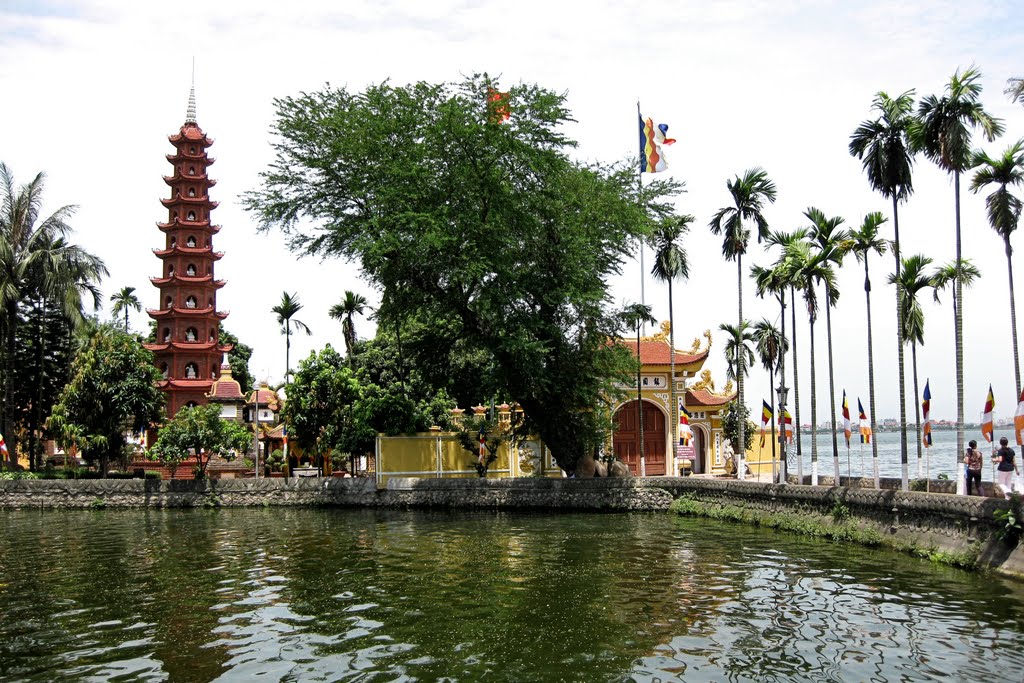 The ancient streets have undergone some alterations owing to historical upheavals, social adaptation and the appearance of some new construction, but they still remain virtually unchanged. So this is why this area with small tunnel houses, crowded streets, pagodas and temples, with curved roofs and green trees, all gives Hanoi it’s own particular original beauty.

Since the end of the 80s with the implementation of the renovation policy, economic life has improved, commerce developed and many houses in the ancient streets have been demolished, repaired or rebuilt and often concrete 3 or 4 storied houses have replaced the old ones. The area of ancient streets has gradually been losing the beauty of its traditional architecture.

Yet, in spite of the alterations and construction, this area still represents a precious legacy left to Hanoians, to be handed down to future generations. This is why now Hanoi’s municipal administration is studying the feasibility of a project to renovate this ancient area.