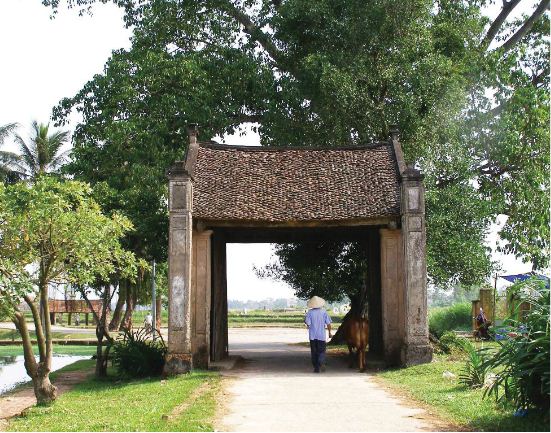 Duong Lam ancient village (Son Tay Town, Ha Tay Province) is located about 50 kilometers from Hanoi to the west. It is in the prime location following the position of “Mountain at back, water in front” which means the back of the village is against Tan Mountain and the front turns to Red River. Coming to Duong Lam, the “two-king” land, birthplace of two national heroes Ngo Quyen and Phung Hung, visitors will be deeply impressed and cannot help being astonished by the colors of time remaining at this ancient village. The streets feature herringbone architecture, along with the vaults, banyan trees, wells, roofs of communal houses, old laterite walls through the ups and downs of time with a layer of ferruginous yellowish brown color. 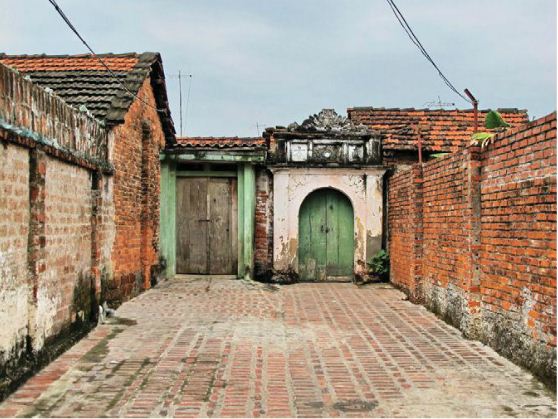 On sweltering summer days, Duong Lam welcome visitors with a tinkling summer choir of the cicadas around the streets. Under the shade of Mong Phu Village Gate next to a century-old banyan tree, tourist can walk around and enjoy the daily activities of local people with the feeling that time seems to standstill.

Squint-brick paths which are full of nostalgia lead visitors through the gates worn out by the time. Sunshine spreads on the ochre-tinted laterite walls spotted with moss, looming behind those moss-green walls are hundreds-year-old houses remained intact through the ups and downs of time. The atmosphere becomes so quiet, which seems to cross people over their separate world of nostalgia reliving the old days. Strolling along the rough empty road to the end of the village, you will see a typical view of Northern countryside, sometimes, the glossy green color of endless rice fields, the mustylime smell of fresh straw in harvest time, or the deep fragrance of rice already in ear.

Coming to Duong Lam when field work is done, sitting at the entrance of the village and listening to “those were the days” stories told by elderly people, you will have the opportunity to experience life here by smelling the lotus flower rising from village ponds into the wind, tasting a piece of “Che Lam” (sweet gruel made from ground glutinous rice) from the old woman of the tea shop, and feeling the glutinous flavor or rice, buttery taste of groundnuts, soft pungency of ginger, strong sweetness of molasses. You just close your eyes, deeply breathe in the peaceful and cherry fresh air, everything mingles together and creates a strange pure fragrance melting in throat and spreading all over mind.

Duong Lam contains not only the typical quiet scenery of a nostalgic village, but also architectural works having historical values which are preserved (nearly) intact. For example, Duong Lam Catholic Church, built in 1953, adapted from architectural style of European churches, or King Ngo Quyen’s Temple, made of brick, shoe-head tile roofed, built under Thanh Thai dynasty (1889-1907). King Phung Hung’s Worshipping Temple was built in “chu-nhi” style (a double house, one in the front used for worshipping, another in the back used for living), under the same dynasty. And everywhere in the ancient village you can find Mau Temple, Cam Thinh Temple, Hoai Giap Temple, Mia Pagoda, On Pagoda …, which are so ancient and deep in color of time. Don’t forget visiting the old wells containing mysterious legends and the old houses with traditional crafts such as making Che lam, Che kho, Keo lac, Keo doi … 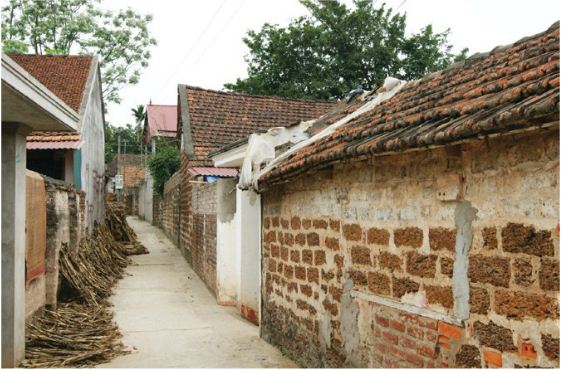 Get away from the busy and noisy city, come to live in Duong Lam for a day tour from Hanoi to enjoy the simple life, fall in line with peace and quiet nature, and feel deadly happy when tasting a yummy sweet piece of Che lam and taking a sip of fresh green tea.