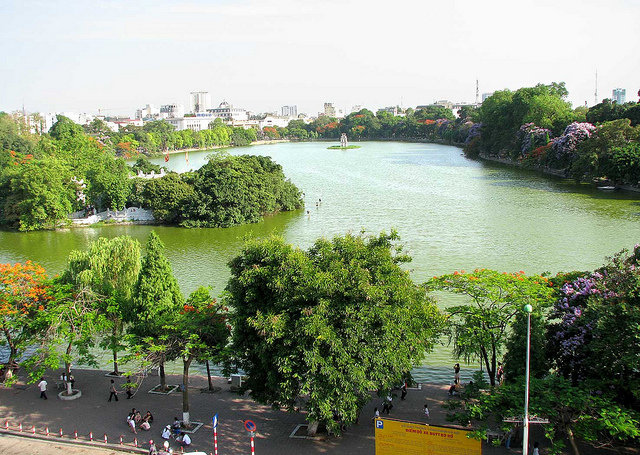 Considered the center of the Vietnam’s capital, Hoan Kiem Lake is a beautiful basket of flowers, a mirror-like green lake, a place of love inside Hanoi.

Now please close your eyes and turn back time to the Le Dynasty in the early 15th century to witness the legendary story around the lake. During the war against the Minh aggressors, the King le Thai To was given a precious fairy Sword by the Golden Turtle God. After 10 years of continuous struggling, the King finally defeated the enemy and reclaimed the nation’s independence. After the peace prevailed, on a nice day, while boating on Thuy Quan (now Hoan Kiem) Lake, there was a large turtle rising above to water and shouting: “Please return the sword to the Dragon King”. Without hesitation, the King threw the sword to the lake. The Turtle immediately grabbed the swords with its mouth and submerged.

The King then mourned the loss of such a valuable sword, yet could not find ether the turtle or the sword. He realized that the God must have lent him the sword to drive back the enemy, but then that his nation was free, the sword must be returned. Hence, King Le Thai To named the lake Ho Hoan Kiem or Lake of the Restore Sword after this episode.

Many generations of Kings after that have all contributed to the beauty of the lake, creating a Hoan Kiem Lake and its complex as its appearance today.

Not only special in its history, Hoan Kiem Lake is also attractive for its water color which is not commonly found in other lakes elsewhere in the country: greenish, with dark or light shade depending on the reflection of the sky. 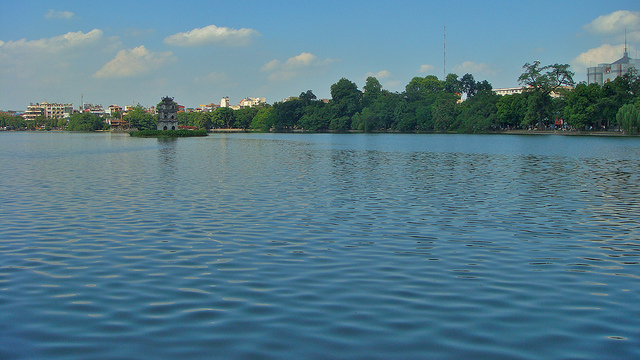 The lake is full of turtle – the sacred animal closely associated with the Hoan Kiem Lake. But it is not the legendary animal any more; it is real for Vietnamese and is affectionately called “Cụ Rùa – great grandfather turtle”. And if you are lucky, you can catch sight of these giant animals rising out of water. And because turtle is considered a sacred animal in Vietnam’s culture (along with dragon, phoenix and unicorn), Hoan Kiem Lake then become a holy place that nurtures turtle.

Hoan Kiem until now has been still a pride of not only Hanoians but also Vietnamese and the center for any distance measurement in Hanoi. As you walk by, you will be witness the pace of life in this peculiar city.

What to do by Hoan Kiem Lake

Don’t miss you chance to take a walking tour around Hoan Kiem Lake to see its attractions as well as take a view over the daily life in this peaceful corner of Hanoi. Undergoing a lot of renovations, Hoan Kiem Lake is now situated inside a complex of Ngoc Son Temple, The Huc Bridge, Pen Tower in the surroundings, making a sparkling colorful natural picture to enjoy. Especially, each destination inside the complex has its own story, making your trip around Hoan Kiem Lake even more unforgettable. 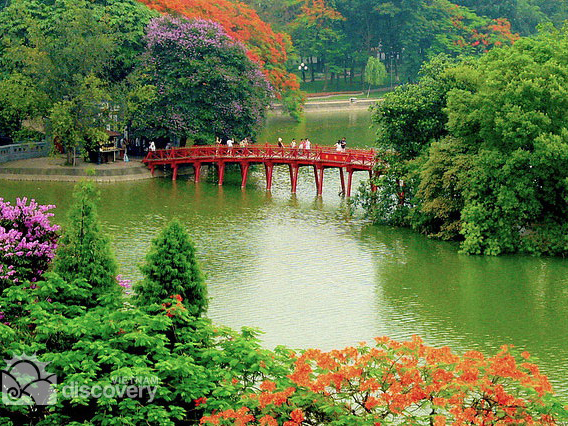 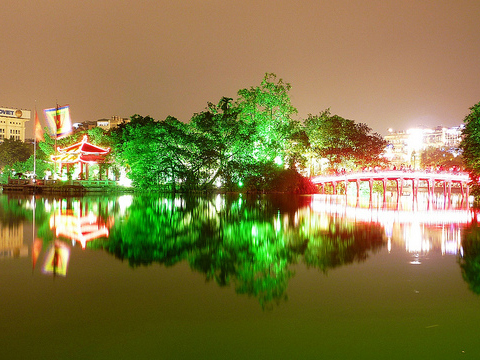 One more thing could not be missed in this beautiful complex is the Turtle Tower which lies in the middle of the lake, so as to remind the Vietnamese of the Turtle God of his great assistance for nation’s independence. 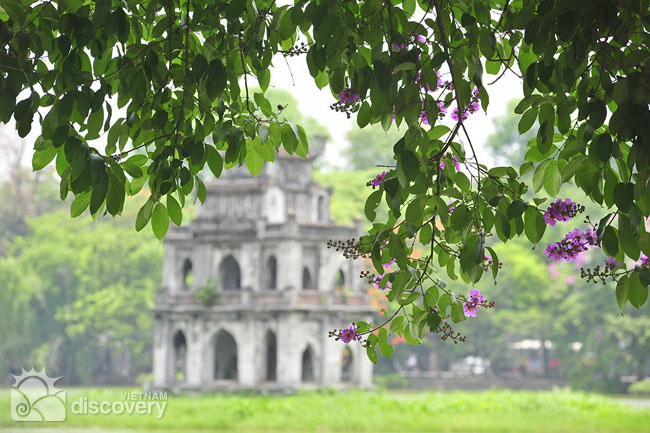 Although the time has covered the lake with a layer of ashes and dust, Hoan Kiem Lake – the popular historical and legendary beauty-spot is eternal for good as an evidence of a fairy & heroic Hanoi during the past wars, and a romantic & charming Hanoi of Today!

Hoan Kiem Lake is considered one of the must-see destinations in Hanoi for everyone stepping on this modern but traditional city. Visitors are recommended to hire a tour guide or book a Hanoi day tour so that they can learn many interesting stories relating to the lake and its nearby attractions.