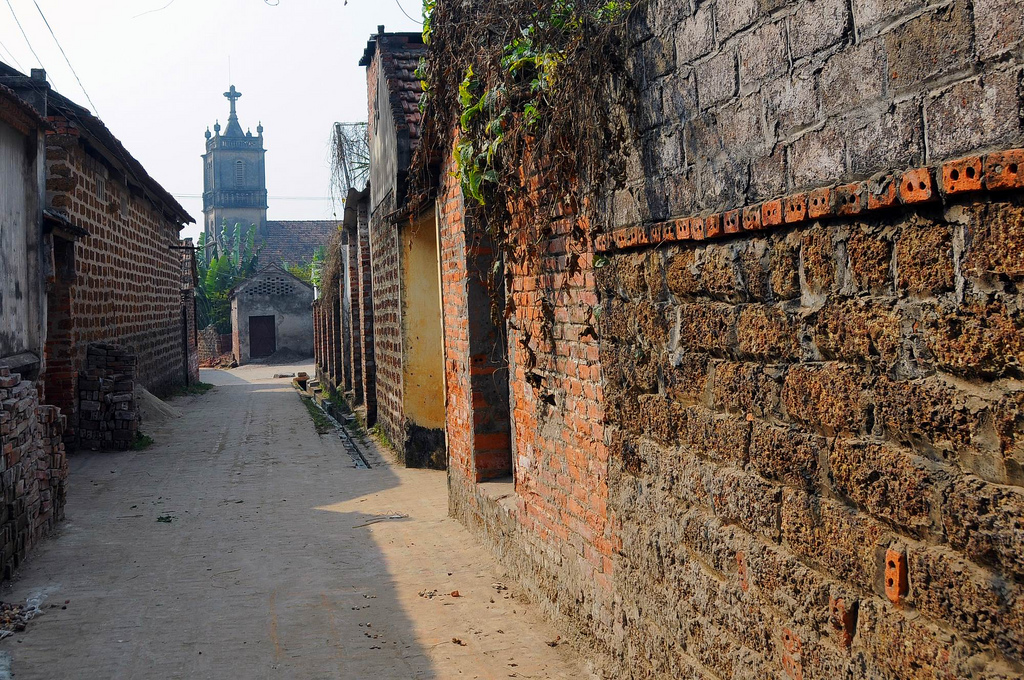 In Duong Lam Village, the smog and crowds of Hanoi are replaced by quiet and serenity. Duong Lam is a typical northern village, with a village gate, a banyan tree, a river wharf, and a communal house. The locals are friendly and eager to share stories about their village’s history and culture. It was honor to be welcomed into the home of the writer Ha Nguyen Huyen, who owns the oldest house in the village. Mr Huyen looks and talks like a scholar of long ago. He impressed us with his deep knowledge and passion for history.

At the village’s entrance stands a banyan tree that is over 400 years old. This is a typical feature of a traditional Vietnam village. Visitors will find narrow lanes, laterite walls and charming old buildings. The Mong Phu Communal House features two main worshipping halls, a back hall, and one room with two big columns. Both buildings are built with four-layered tiled roofs and decorated with sculptures of swirling clouds and flying dragons. The communal house is roofed with fish-scale roof tiles. The columns feature distinctive patterns of a dragon’s head and the four scared animals. The villagers believe that this communal house rests over a dragon’s head. Two old wells on either side represent the dragon’s eyes. In this sacred place, people should never turn their backs to the main entrance of the communal house.

There is a large yard in front of the communal house, which is actually the intersection of six roads leading to six hamlets. This front yard is used to host the village’s festivals. During the first ten days of the Lunar Year, a festive atmosphere reigns in Duong Lam. Villagers observe many traditional rituals and enjoy different folk games during the Lunar New Year. 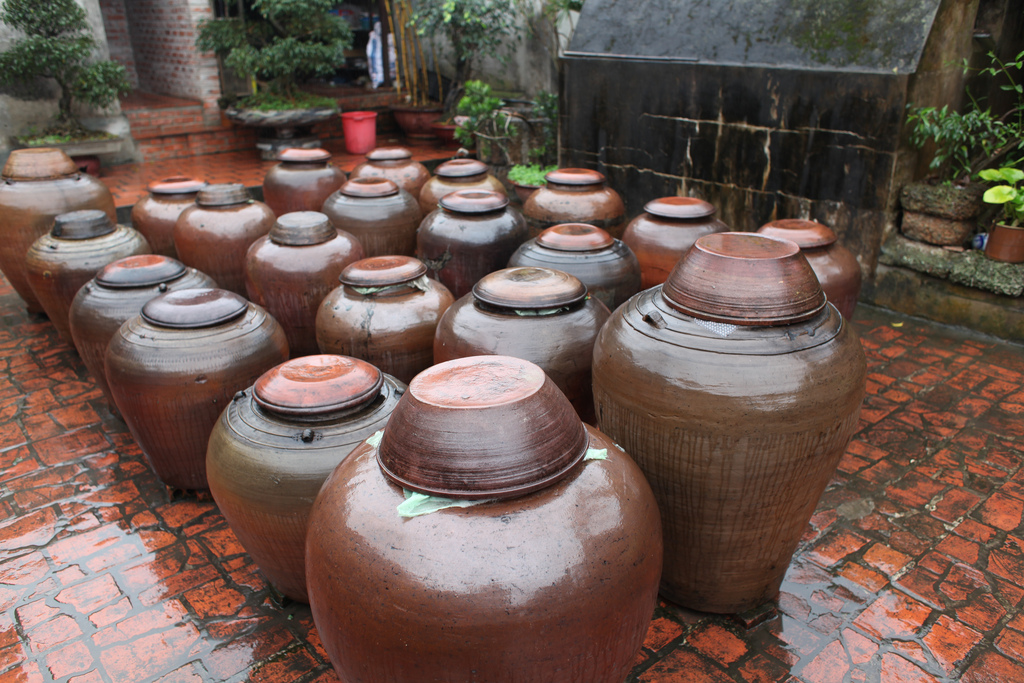 Leaving Mong Phu Communal House, we follow a quiet lane into a hamlet on a hill. The houses lie close together. Some ancient thatched-roof cottages may still be found. A story passed down through the generations warns the villagers not to build their houses taller than the communal house or they risk being cursed. Laterite is the most popular building material in this village. Many families build their walls and gates from laterite. Without stucco or cement, these walls are very sturdy.

The writer Ha Nguyen Huyen owns one of the finest ancient laterite houses in the village. Entering his house, visitors will see many vats of soy sauce in a tiled courtyard behind the main gate. His family is trying to revive the traditional occupation of making soy sauce. Their house is roofed with brown tiles. An altar stands in the central room – the most respected place in the house. The furniture is in an ancient style. Mr Huyen proudly told us about the village’s history and relics relating to two national heroes: King Phung Hung and King Ngo Quyen. Villagers have long preserved the worshipping houses and mausoleum of these national heroes.

The temple dedicated to King Phung Hung is located on high ground surrounded by green trees. King Phung Hung was born when this region was dominated by forces of the Tang and Sui dynasties. Together with Phung descendants, King Phung Hung rallied soldiers and peasants to rise up and fight. He led his troops to occupy Tong Binh (now Hanoi) and fought against the troops of Cao Chinh Binh to gain independence in the late eight century. Due to this victory, people honor Phung Hung as Bo Cai Dai Vuong (the Great King). 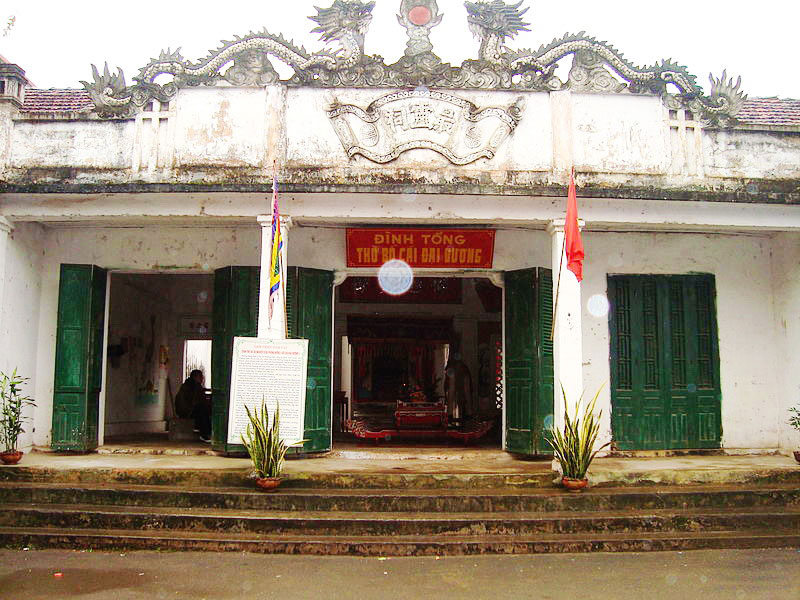 About 500 meters to the left of King Phung Hung’s Temple lies the mausoleum of King Ngo Quyen. According to legend, King Ngo Quyen was born with exceptional strength and brilliant eyes. As a teenager, he grabbed the horns of two fighting buffalos, scaring them so badly that they ran away. He grew up to become the general of Duong Dinh Nghe, the governor of Chau Hoan, Chau Ai. 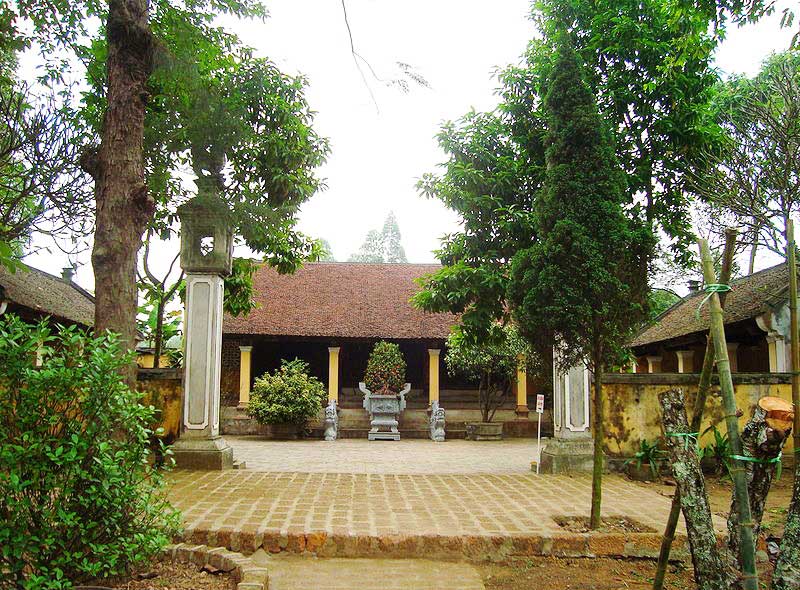 Following the era of Kieu Cong Tien Chaos, he organized followers to resist foreign invasion. His forces achieved a historic victory on the Bach Dang River in 938. The mausoleum of Ngo Quyen is a vast complex with fresh, cool air surrounded by green rice fields. Nearby stands a Siamese Rough Bush said to be a thousand years old. According to legent, the king tied his war elephant to this bush. It is a symbol of peace in this historic village.