[twocol_one]For me, one year in Vietnam and having chance to experience all the special events in this country is really an unforgettable experience. While the rest of the world continued racing through the same old year, Vietnam stepped off for a week and then, reluctantly stepped bank on. This is a very special holiday in Vietnam in general and in Hanoi in particular. 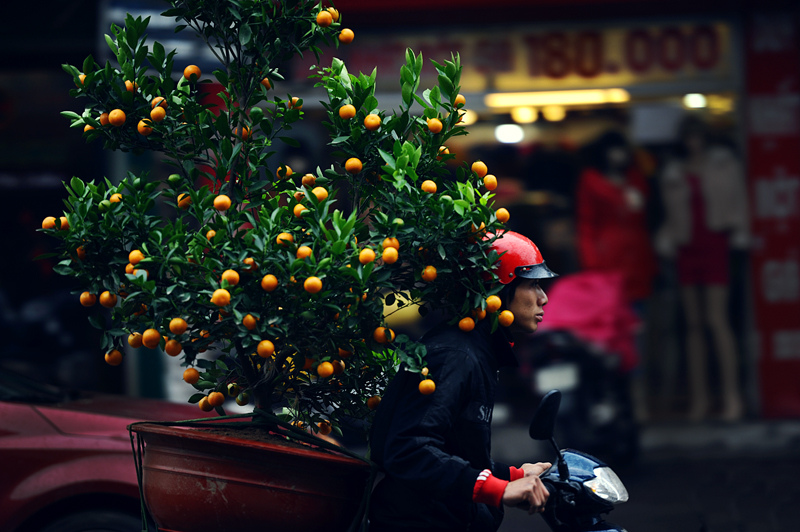 Tet is coming in Hanoi

By early February, I had lived in Hanoi for over a year altogether. I’d experienced every season, from the coldest days of winter to the most sweltering summer heat. I’d witnessed all the holidays, from International Women’s Day and Teacher’s Day to the Mid-Autumn Festival and the birthday of Ho Chi Minh. I’d experienced every holiday – that is, except for Tet. Tet, Vietnam’s Lunar New Year, was the most important time on the Vietnamese calendar. For Vietnamese, it was like Thanksgiving, Christmas, New Year’s, and everybody’s birthday combined.

According to tradition, in the days before Tet, people bring delicacies to others they want to impress. To keep up with the demand for these items, temporary specialty shops opened all over town, their bright red banners wishing everyone a

[/twocol_one] [twocol_one_last]happy Tet and proclaiming the delectability of their particular products. 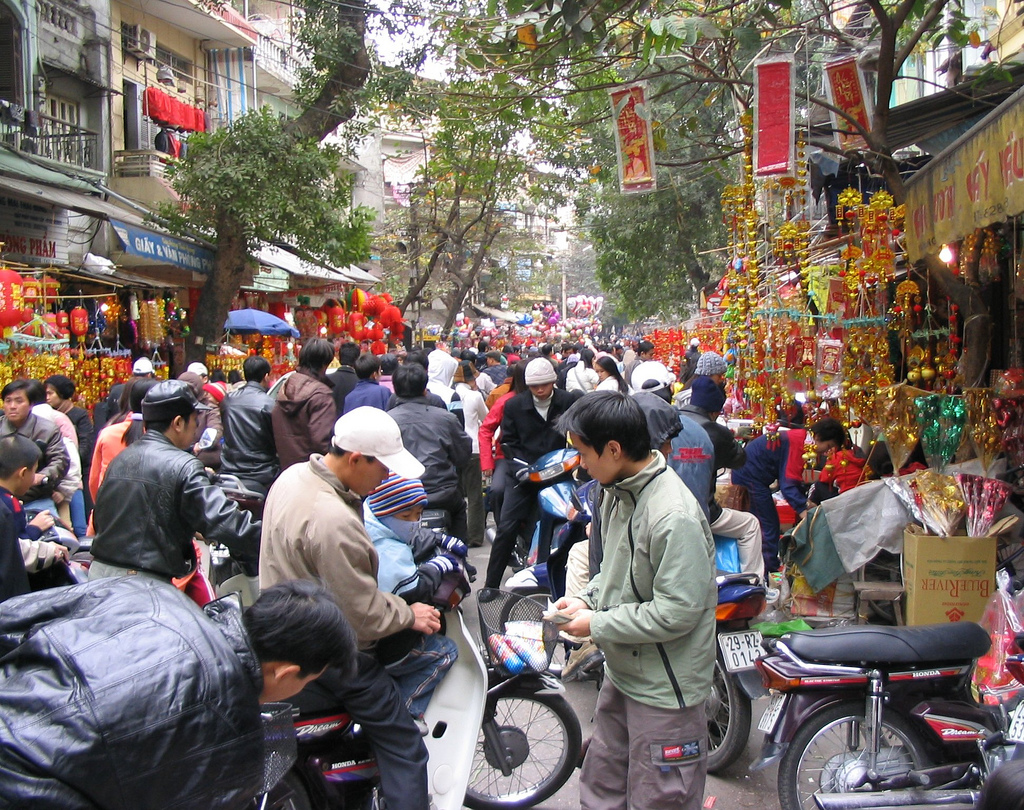 I and my friend went shopping at one of the biggest markets, where shopkeepers stood in front of dozens of glass jars full of suger-coated fruits, the holiday treats know as mut. A saleswoman weighed out half a kilo of apricot mut for Yen to give to her aunt, a mixture of cherry and ginger mut for her mother, and tomato mut she’d give to her favorite professor from the university. All around us, shoppers were stocking up on jars of imported pickles, apricot wine, Russian vodka, dried sausages, and tins of golden Danish sugar cookies. In a country where most diets were limited to whatever local farms and factories produced, a jar of French mustard meant real luxury and could serve as the perfect holiday gift. Foods that foreigners bought in Hanoi all year were now being swept up by the locals.

Vendors began to appear on the city streets selling miniature orange trees and hoa dao, the small blossoming peach trees that were as much a requisite part of Tet as Christmas trees at Christmas.

The vendors roamed the city with trees slung to the frames of their bikes, and prospective buyers checked the trees carefully, looking for just the right mix of branch, bud, and flower. One afternoon, I took Viet to the Tet flower market, in the corner of the city’s Old Quarter. With Viet balanced on the back of my bike, I rode right into the center of the market, stopping in what seemed like a forest of trees. The tree-sellers were bundled up against the winter cold, and as the wind picked up, I buttoned all the buttons on Viet’s coat. The lacy pink veil of peach blossoms couldn’t keep out the chill, but it promised the coming of spring.

[/twocol_one] [twocol_one_last]Hanoi became strange and dreamlike then. Even time changed. As if following some subtle shift designated by the heavens, just as the holiday began, Vietnamese returned to their ancient tradition of marking days. Throughout the rest of the year, they follow the solar-based calendar that’s used in the West. At Tet, they switch to the lunar one. If, for example, Tet began at midnight, then following day was the first day of the Lunar New Year. Suddenly, Vietnamese began to follow the moon. No matter what the Western calendar might call the date on which the Lunar New Year’s Eve fell, Vietnamese called it “the thirtieth of Tet,” and, according to the logic of the season, New Year’s Day itself was known as “the first of Tet,” followed by the second, the third, fourth, etc. The rest of the world continued racing through the same old year, while Vietnam stepped off for a week and then, reluctantly stepped back on

By: By Dana Sachs