Home > Hanoi Stories > Villages in the city of Hanoi 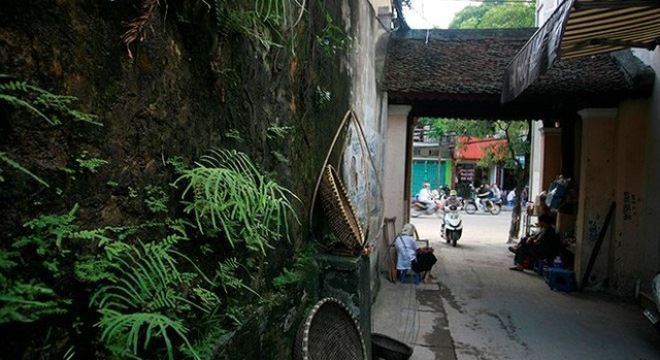 A village corner of Hanoi

[twocol_one]Walking around Hanoi’s Hoan Kiem Lake and gazing upon Hang Dao Street today, it’s hard to imagine that, in the early 20th century only some 10% of houses would have had brick facades. Even these would, for the most part, have had palm-leaf roofs covering their inner sections. At that time, the water level in Hoan Kiem Lake rose and fell depending on the season and the weather. The lake was surrounded by sparse trees. While the lake was pretty, people living on Hang Dao, Hang Gai and Cau Go streets used to wash their clothes and mats in it. Some residents even disposed of rubbish in certain corners of the lake.

According to the writer Vu Ngoc Phan (1902 – 1987), the Lake Side Electricity Factory was built in 1902. Street lights, however, were only found on certain streets populated by French people. In 1910, three or four lamp posts were installed on each of the following streets in the Old Quarter: Hang Dao, Hang Ngang, Hang Duong, Hang Bo, Hang Gai, Hang Bong, Hang Trong and Dong Xuan. Nowadays, these streets reveal few traces of the villages that they once were. Many places in modern Hanoi were once considered separate villages.

One such village was that of Ngu Xa, which was located on the bank of Truc Bach Lake. Long ago, Truc Bach Lake was connected to Ho Tay (West Lake). The Co [/twocol_one] [twocol_one_last]Ngu Yen dyke was later buitto divide these two lakes. While “Co Ngu Yen” actually means “solidly built”, the dyke’s name was soon distorted to “Co Ngu”. Co Ngu road was renamed Thanh Nien (Youth) Road.

Ngu Xa was just one of many handicraft villages located around West Lake. For almost 500 years, Ngu Xa has been home to copper workers. During the Le Dynasty (1428 -1788), the royal court drew skilled copper workers from Van Lam, Hung Yen and Thuan Thanh, Bac Ninh to the capital, where they were put to work casting coins, bells, statues and ritual objects for the royal palace. Initially, these copper workers lived and worked on the street currently known as Lo Duc. Later, they were relocated to the banks of Truc Bach Lake. The village men worked with copper and the women collected scrap metal. 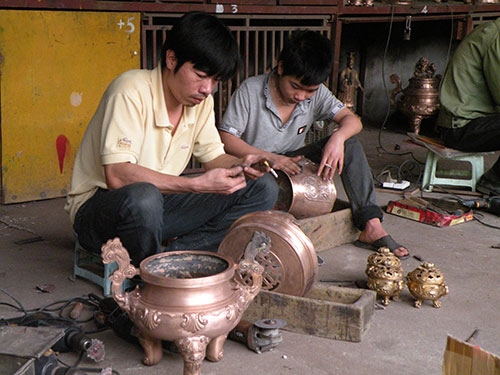 As recently as the early 20th century, most of the land around Ngu Xa village remained[/twocol_one_last]

[hr] [twocol_one]unoccupied. In 1917, loal authorities allowed part of the lake to be filled, a roaf to be built, and blocks of land to be put up for sale. Residents of Ngu Xa village were given priority to buy the land on the condition that they build their houses with brick rather than palm-thatched roofs. Streets founded at that time included three roads named 103, 104, 105 (now renamed Nguyen Khac Hieu, Lac Chinh and Nam Trang) and three cross streets named Mac Dinh Chi, Tran Hung Dao (the latter now known as Ngu Xa) and 108 (now Tran Thai Suong). Little by little, the residents built villas and taller buildings. Those who lacked the money to build brick homes sold their land and moved to Phuc Xa. Many of the Ngu Xa’s residents did not benefit from land sales.

To this day, residents of Ngu Xa remain proud of the area’s history. Quan Thanh Temple, located on the corner of Thanh Nien and Quan Thanh Streets, contains a fine black copper statue made during the 17th century. Than Quang pafoda was built in the middle of the 18th century, then rebuilt in 1917. An ancient bell from the post-Le Dysnaty and worship items like censers and candlesticks were made by craftsmen in Ngu Xa.

Today, Ngu Xa is virtually unrecognizable, having become urbanized at the dizzying speed in the last two decades. Residents could make a lot more money from selling their land than they could from copper[/twocol_one] [twocol_one_last]work. Many tall buildings occupy the site of the one-time handicraft village. Today, Ngu Xa is know for its rolled and fried noddles, which draw diners from all over Hanoi.Those few families that still maintain copper workshops face trouble finding space. Some families house their coffer kilns inside homes that measure just 30 square meters, the living and working quarters separated by thin walls.

Coppersmith Nguyen Van Ung explains that his family has temporarily rented some land near the Red River.

Nowadays, West Lake is home to fancy villas and restaurants. But long ago, this pretty lake was rimmed with craft villages. According to the researcher Nguyen Vinh Phuc, Buoi Market was held on the southwest corner of the lake on days ending in fours or nines of the lunar calendars.

One of the villages in the Ke Buoi Area was Yen Thai, famous for producing paper. Yen Thai’s paper was mentioned in a geography book by Nguyen Trai (1380 – 1442) and in the following folk verse:

Shadows of smoke and mist spread

To the rhythm of Yen Thai pestles

On the mirror of West Lake[/twocol_one_last]

While this trade and many others have died out, signs of the old villages remain. In the past, Ke Buoi had many gates, some of which were adorned with poetic parallel sentences. At the end of Thuy Khe Street, near Buoi Market and Lac Long Quan Street, visitors will find Gieng gate, Hau gate, Chua gate, Dong gate, Cai gate and Xanh gate. Some former villages gates have since become market gates. Others stand between newly-built villas.[/twocol_one] [twocol_one_last] 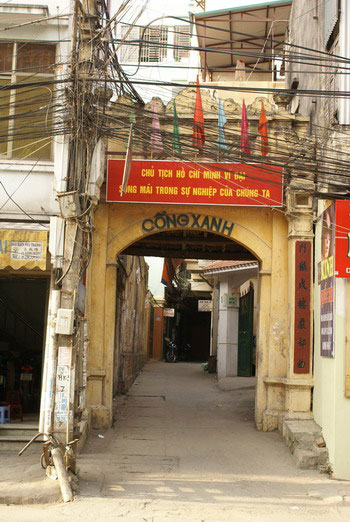 In olden times, Vong Village, located in what is now known as Dich Vong Ward, Cau Giay District, was synonymous with grilled rice flakes, a treat made from young rice. Each autumn, Hanoians would look forward to eating these tender grains, which were wrapped in aromatic leaves. Locals were highly skilled in growing rice and preparing rice flakes. The well-known food writer Nguyen Tuan (1910 – 1987) described the process as follows: “Rice grows and blossoms, the flowers become grains, the milky grains are picked to make grilled rice snacks. The flavor is very mild”[/twocol_one_last] 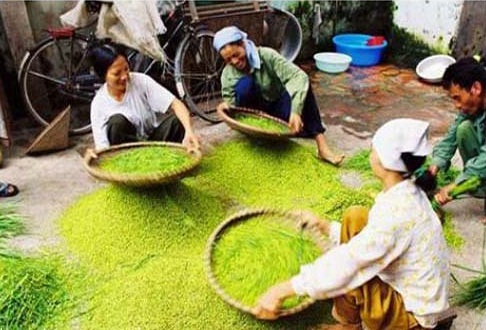 Nowadays, Vong village is associated with university students, as local residents have turned to lodging students to make money. As the number of student residences in the area increase, other businesses frequented by students proliferated, including Internet cafes, coffee shops and copy shops.[/twocol_one] [twocol_one_last]Once upon a time, affluent Hanoians were all familiar with peaches from Nhat Tan and Phu Thuong villages and kumquats from Quan An and Tu Lien. Nowadays, these four former villages have become urban wards with high land values. Growing fruit on this high-prices land is no longer economically feasible.

People from Nhat Tan, therefore, now grow peach trees on the Red River dyke plain. It is very possible that this area will also be transformed into an urban neighborhood.

While many older people have sweet memories of village life, urbanization is unstoppable. But there should be studies and plans to ensure that development brings improvements and retains our Vietnamese heritage.