Hanoi is my favorite city in Southeast Asia. It is the place where history lingers on as the spirited people of Vietnam charge into the future. Visiting Hanoi, I spend a special love in its French colonial character, a vestige of decades when the tricolor waved over the country. Badly beaten by nationalist armies, the French finally pulled out of Vietnam in 1954, but the U.S. took up the battle against the same enemy in an effort to stem the spread of communism. 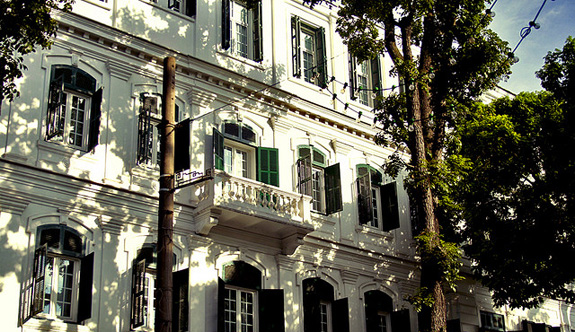 When the last American troops evacuated and the north and south reunited in 1973, Vietnam seemed to disappear behind the red walls of its communist regime, stagnating economically until free market reforms were instituted in 2005, stimulating an explosion of growth, with unbridled development in its wake. Saigon shot up, but Hanoi lagged somewhat behind, which helped keep its French colonial architecture and ambience intact. So travelers can still feel the subtle, seductive French-Vietnamese cultural blending that infused couture, art, literature and cuisine during the colonial era in Hanoi.

Embarked on a grand mission civilisatrice, the French colonial administration laid wide, tree-lined boulevards patterned on the Champs Élysées, installed electric lights and built villas in a hybrid style known as Norman Pagoda. With them came the language of Voltaire, Impressionist art, café society and Catholicism, a faith still practiced by an estimated six million Vietnamese.

A first stop for flâneurs is St. Joseph’s Cathedral, a neo-Gothic edifice with twin bell towers to match those of Notre Dame de Paris, completed in 1886 several blocks west of Hoan Kiem Lake. Black Flag guerrillas laid siege to the neighborhood in 1883, forcing harassed French colonists to hide in Ba Da Temple down the block; later the communists closed the cathedral, though worship resumed in 1990, reaching an annual climax at Christmas when choirs sing and little girls wearing traditional red and yellow ao dai tunics perform in a pageant. 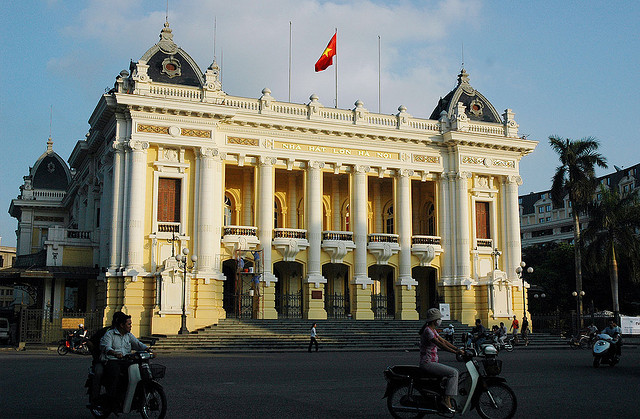 Next catch a bicycle taxi—known as a pousse-pousse, which means push-push in French—to the Hanoi Opera House, inspired by the beautiful Palais Garnier in Paris. A yellow and white neo-Classical confection on August Revolution Square, it celebrated its centennial last year and often hosts performances by the Vietnam National Orchestra and Ballet. You have to attend an event to see the marble staircase, French murals and chandeliers inside, as well as the balcony where the Vietminh took control of the city in 1945. 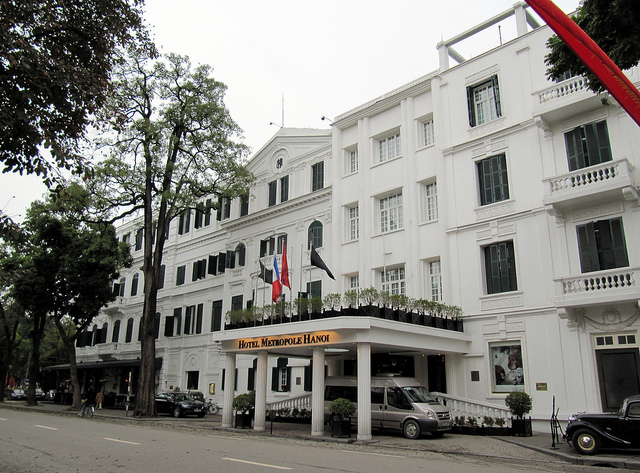 Nearby is the Hotel Metropole, which opened in 1901, one of the most luxurious hotels in Asia, attracting luminaries like Charlie Chaplin and Paulette Goddard on honeymoon, Graham Greene and Joan Baez, who had to take refuge in an underground shelter during U.S. bombing raids in 1972. American war correspondent Stanley Karnow saw the hotel at its nadir during the war. “Paint flaked from the ceilings, its bathroom fixtures leaked and rats scurried around its lobby,” he wrote in his Pulitzer Prize-winning Vietnam: A History. 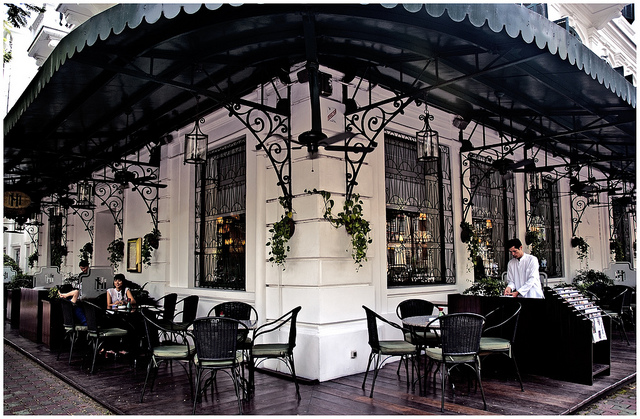 But the Metropole re-emerged victoriously after a 1990 restoration, a perfect evocation of the colonial era, beginning with the vintage Citroën parked in the porte- cochere. The three-story lobby yields to intimate sitting rooms lined in dark, precious wood, prints, chinoiserie furniture, orchids and silk, where it’s easy to imagine men in white linen smoking opium-laced cigarettes. Additions were built to the rear, but the rooms in the old section summon up the colonial era best with elegant entryways, sitting areas and beds underneath slowly revolving ceiling fans.

It’s unwise to romanticize the colonial period, of course. French rule impoverished landowners, encouraged opium addiction and almost broke the spirit of a people with a long love of independence. All that’s behind the country now, but the French-Vietnamese style perseveres, a special enchantment for visitors to Hanoi.