On April 19th, the Hanoi Municipal People’s Committee and the Ministry of Construction announced the project for conserving; restoring and promoting its values, which stated that the Thang Long Imperial Citadel of Hanoi will be acknowledged as a cultural and historical park.

The detail project is divided into three parts: a planning schedule, a plan for conservation, and a regulation on the management of investment and construction; with the purpose of creating a community cultural space with harmonious landscapes and architecture, as well as ensure technical infrastructure of the overall area of Ba Dinh political center. 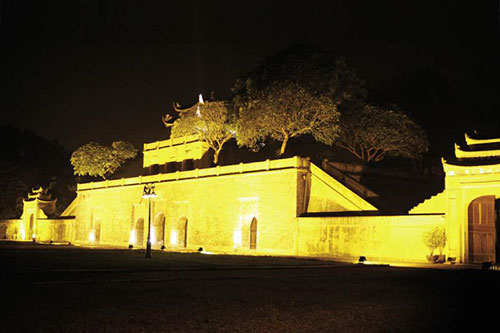 The Imperial Citadel of Thang Long sparkling at night

When the plan completes, the Imperial Citadel of Thang Long will stretch from the Flag Tower (located on Dien Bien Phu Street) to the North Gate (located on Phan Dinh Phung Street). Also, the buildings which are newly constructed and not important will be moved. Furthermore, protection plans for the archaeological site at 18 Hoang Dieu Street will be implemented for showcasing artifacts.

The citadel has passed through 13 centuries and under numerous dynasties of Ly, Tran, Le and Mac as the political nerve-center. Visiting the citadel, visitors can get an insight into the development of Vietnam in general and Hanoi capital in particular through the architecture and ruins found there.

Not only being recognized as a national special relic as well, but the Imperial Citadel of Thang Long is also a world cultural heritage with outstanding historical, cultural and architectural values. The implementation of the project is expected to plays a significant part in promoting the unique cultural, historical, artistic, urban archeological values of the nation as well as raising public awareness of preserving heritages of Vietnam.

For discovering the country of world heritages of Vietnam, visit at: http://vietnamdiscovery.com/discover-vietnam-the-country-of-world-heritages-34

If you don’t have much time in Hanoi, taking a Hanoi city tour or short trip from Hanoi is ideal option. Choose your itinerary at: http://cityinsight.vn/vietnam-city-tours/ha-noi.html