As a paradise for food lovers, Hanoi is home of varieties of delicacies. And if you take a Hanoi food tour, La Vong grilled fish pie (Chả cá Lã Vọng) seems to be a cannot-be-excluded dish. If for other food delicacies in Hanoi, no enjoyer knows for sure who their creators are and when they are created, the la Vong grilled fish pie is different; it originated from Chả cá Street and Hanoi is considered its birthplace. 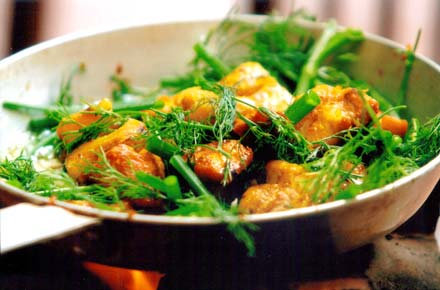 In the 20th century, the street used to be home of many paint sellers from Northern provinces of Yen Bai and Phu Tho, as such it was called the Paints Street at that time. This name was used until the end of the first decade of the 20th century when a family on the street hit upon a new idea to sell grilled fish pie with soft noodles and seasoning which then was offered on the very street and soon became a popular dish. From then, the Paints Street was renamed Cha Ca Street (Grilled fish pie street).

There is no better way to see the big difference as well as the unique creativeness of the special dish of grilled fish pie than to taste it yourself.

Not only by coming in luxury restaurant, but just sitting down at a street-side table, you can enjoy the best dish of La Vong grilled fish pies. After the diners order, the waiter will start laying some seasonings including a bowl of well-stirred shrimp paste sauce mixed up with lemon and some slices of fresh red chili, a plate of grilled ground nuts of gold yellow color, various species of mint vegetables onions in small white slices. 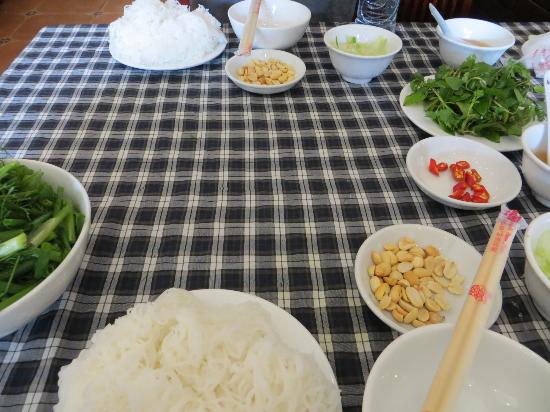 Preparing for a party with la vong grilled fish pies

To many customers, the sight of such seasoning already greatly stimulates their appetite. A few minutes later, fried fish pies, yellow in color and flagrant in smell and the dill will be places into the frying pan which is put on a charcoal stove for the diners to serve themselves. The delicious smell and the sound of the boiling oil are the prelude of the exciting party. 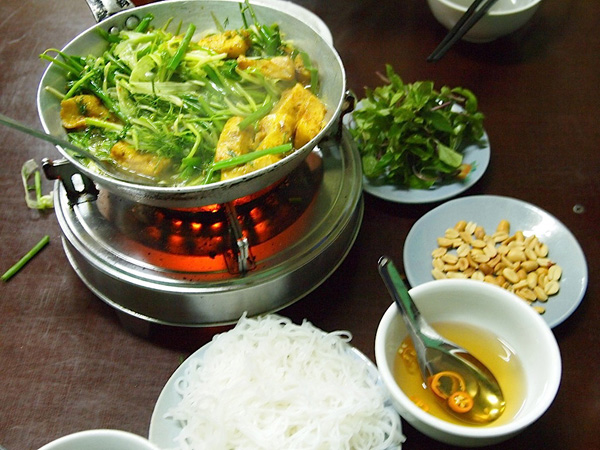 And now, it is time for picking and choosing what you like from the dishes on the table; sticking them into your bowl. Everything in all dishes should be eaten together.

Eating grilled fish pies on a right day, in the right weather is also another detail that makes the experience even more complete. It will be ideal to enjoy the dish on a cold day with Northwest monsoon winds. Or if you want to try the food in summer, it is better to choose a rainy day when the weather is cooler. Let’s taste it now when the weather is cool.

In Hanoi, there are 2 suggested restaurants to enjoy La Vong grilled fish pies:

No. 87 Nguyen Truong To Street, Hanoi